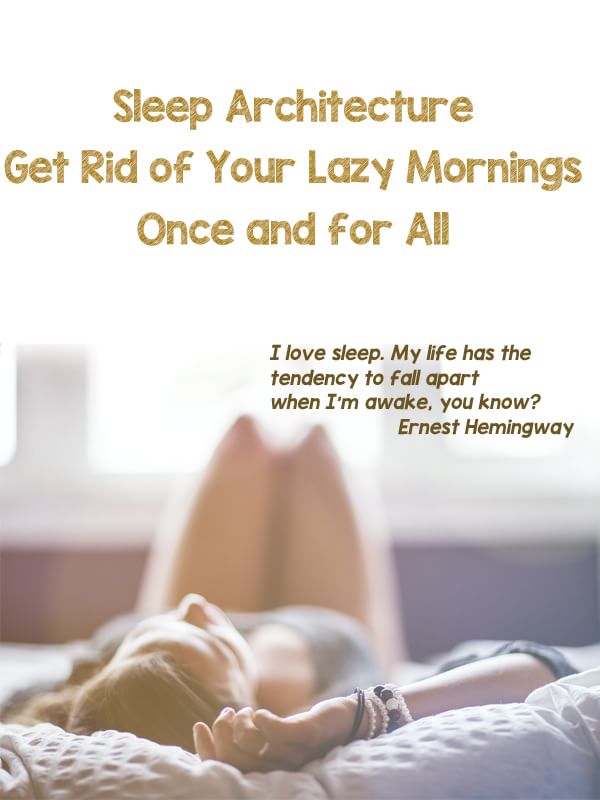 Sleep Architecture is, actually, a term that defines the different stages and patterns of sleep. It’s based on an individual’s level of depth and psychological characteristics. In addition, it depends on the age, ethnicity, and genetic profile as well. It won’t be fair to judge the sleep architecture of one regime with other. Since, the results could differ on a grand scale. Every region and every person have a different lifestyle, and a different pattern of sleep…

I love sleep. My life has the tendency to fall apart when I’m awake, you know?
Ernest Hemingway

However, the professional scientists have categorized the ‘Sleep Architecture’ in two general categories – NREM (non-rapid eye movement) & REM (rapid eye movement). In 2007, The American Academy of Sleep Medicine (AASM) divided the NREM sleep into three main phases, and exhibited the REM sleep with just one phase. According to them and well-renowned researchers, every human being experiences this sleep architecture – two general categories, or four phases – on a daily basis. And, it can be represented by a graph called a “Hypnogram” – a recording of the brain wave activity from an electroencephalogram (EEG) during a cycle of sleep; it records both NREM and REM sleep phases.

Now, first, let’s canvass the NREM sleep phases, and see how they work when we’re asleep.

NREM sleep is also known as dreamless sleep, as dreaming is rare in its phases, and unlike REM sleep, the muscles aren’t paralyzed either. The recordings from the several high rank studies exhibit that, during this sleep, the brain waves are typically slow and have high voltage. The blood pressure, breathing, and heart rates are also slower than regular.

In a way, it’s like you’re pondering something in visual images, while your body is still and in a relaxed state. People, who are insomniacs, and face sleep problems – like sleepwalking and etc., actually, stay stuck in the NREM sleep cycles, most of the times. If you analyze and read the study of the experts, you’d be surprised to know that we, humans, spend 80 percent of our time in NREM sleep mode.

Allow me to explain three different phases of NREM sleep…

Phase #1 – The Transition: It’s an interesting phase; people who go through this phase often believe that they weren’t, actually, sleeping; it’s utterly easy to wake them up. During this phase, you experience hallucinations (someone calls your name?) and hypnic jerks (a twitch which happens just as you beginning to fall asleep). This transition lasts about 5-10 minutes; the muscle activities slow down and eyes ball move behind the eyelids. In addition, it’s utterly easy to wake you up during this time. It happens because your brain produces ‘Theta’ brain waves, which are also known as slow brain waves; it’s a trance like hypnotic state that soothes your body and mind.

Phase #2 – Light Sleep Cycle: During this phase, the eye movement stops and the body temperature drops. A person experiences short bursts (12-14 Hz) of rhythmic brain activity, known as: Sleep Spindles, Sigma Bands, and Sigma Waves. If you see a person mumbling, or sleep-talking, it means he’s currently experiencing the phase two of NREM sleep. Since, it happens right after the first phase, and it lasts for approximately 20 minutes. The professional scientists confirm that we pass through this stage several times while sleeping and it occupies 45 to 50 percent of our sleep time. Unlike phase 1, a sleeper becomes harder to awaken, and the conscious alertness of the external environment disappears; the sound of the TV, or conversation, doesn’t disturb.

Phase #3: Deep Sleep Cycle: Now, this is when the body performs the most important tasks. It improves your immune system, builds and strengthens muscles, and repairs the tissue. If I say, this phase of sleep is as important as food and water, it would be utterly right.  In the phase three, the slow brain waves – Delta Waves – begin to appear; they range from 0.5 – 2 Hz Therefore, sometimes, we call this phase “Delta Sleep”. The things like sleepwalking and night terrors also happen in this phase, as it’s not possible to generate response from them. And, besides, according to scientific researches, during this phase, the blood flow directs away from the brain and moves towards your muscle in to reinstate energy.

It’s the final phase of sleep – rapid eye movements and the paralysis of the muscles. The REM sleep is known as “Dream Sleep” or “Paradoxical Sleep”. Since, unlike NREM sleep, the brain becomes more active, while the muscles become more relaxed. And, because of this brain activity, you dream. The studies reveal that, after falling asleep, we enter into this state after 70 to 90 minutes. However, the more interesting is that the REM state also has a few different phases, because as its phase over, the body returns to the 2nd phase (NREM – Light Sleep) again. And, it happens, approximately, 4 to 5 times throughout the night

The first phase of REM sleep generally lasts for only 10 minutes, but its final phase can also last up to an hour. The babies spend almost 50 percent of their sleep in the REM phase, whereas the adults spend only 20 percent… Apart from this, if you would disrupt a person during REM sleep, he won’t follow the sleep order again; he’ll, in fact, enter directly into a REM state. The scientists from all walks of life are still exploring REM, as it is mysterious and still holding some latent secrets, which are rather baffling to them.

Having Troubles Waking Up?

During sleep, a hormone called melatonin is released throughout the night to induce a relaxing sensation throughout the body. When it is dark, your body produces more melatonin; when it is light, the production of melatonin drops. Being exposed to bright lights in the evening or too little light during the day can disrupt the body’s normal melatonin cycles.[i]

Once the body is triggered to wake up (I.e. sunlight or an alarm clock) the body stops producing melatonin. The problem is that even though melatonin is not being produced anymore, the remaining melatonin in the body lingers for about 30-50 min. Melatonin production is halted by blue light, that’s why it is beneficial to use a program like f.lux to reduce blue light from electronic screens if you are working in a dark office.

Blue light/sun light helps to wake up by halting production of melatonin, therefore for winter season, when it is dark almost all day, recommendation would be to get alarm clock that turns on blue light 30-50 minutes before waking up.

After you wake up, immediately drink a glass of water.  It helps to waken up your body and gives you a bowel movement.

Waking up at a right cycle

As you already know, every sleep cycle have it’s own time, so it is fairly easy to calculate the best time to wake up or go to sleep. Try sleepyti.me to calculate best wake up time.

The sleep architecture is right in front of you! Now, you can decide on your own that how much sleep you require. Even if you want to take a nap, it’s essential to meet the phase three of NREM sleep. Since, as I’ve stated earlier, the phase three regenerates the energy and repairs the tissues. In order to follow all these phases and relish the good night sleeps, develop a schedule while keeping this architecture in mind, and stick to it every day. If you’re a victim of Insomnia, you can take assistance from Binaural Beats and Isochronic Tones; they’re popular and designed to produce different waves in your brain.